In addition to the awesome Guild/Team additions as well as the Halloween map skin, Version 1.9 of Super Evil Megacorp’s mobile MOBA Vainglory (Free) also saw the debut of Phinn, the latest hero to enter the Halcyon Fold. It’s always nice to see a new Support character and like all the other heroes, Phinn has some pretty crazy tricks up his sleeve. If you’re interested in seeing how Phinn plays within the meta, read on as we offer a beginner’s guide.
A giant, lumbering beast with a hefty looking anchor, take one look at Phinn and the first thing you’d think is he’s probably really slow and can take a beating. In this case, you’d be completely right. Phinn easily has the slowest starting speed of any Vainglory hero, to the point where the recommended item build even has you starting with boots as your first item! That slow speed is offset by a ton of armor, health and some pretty crazy abilities and traits. 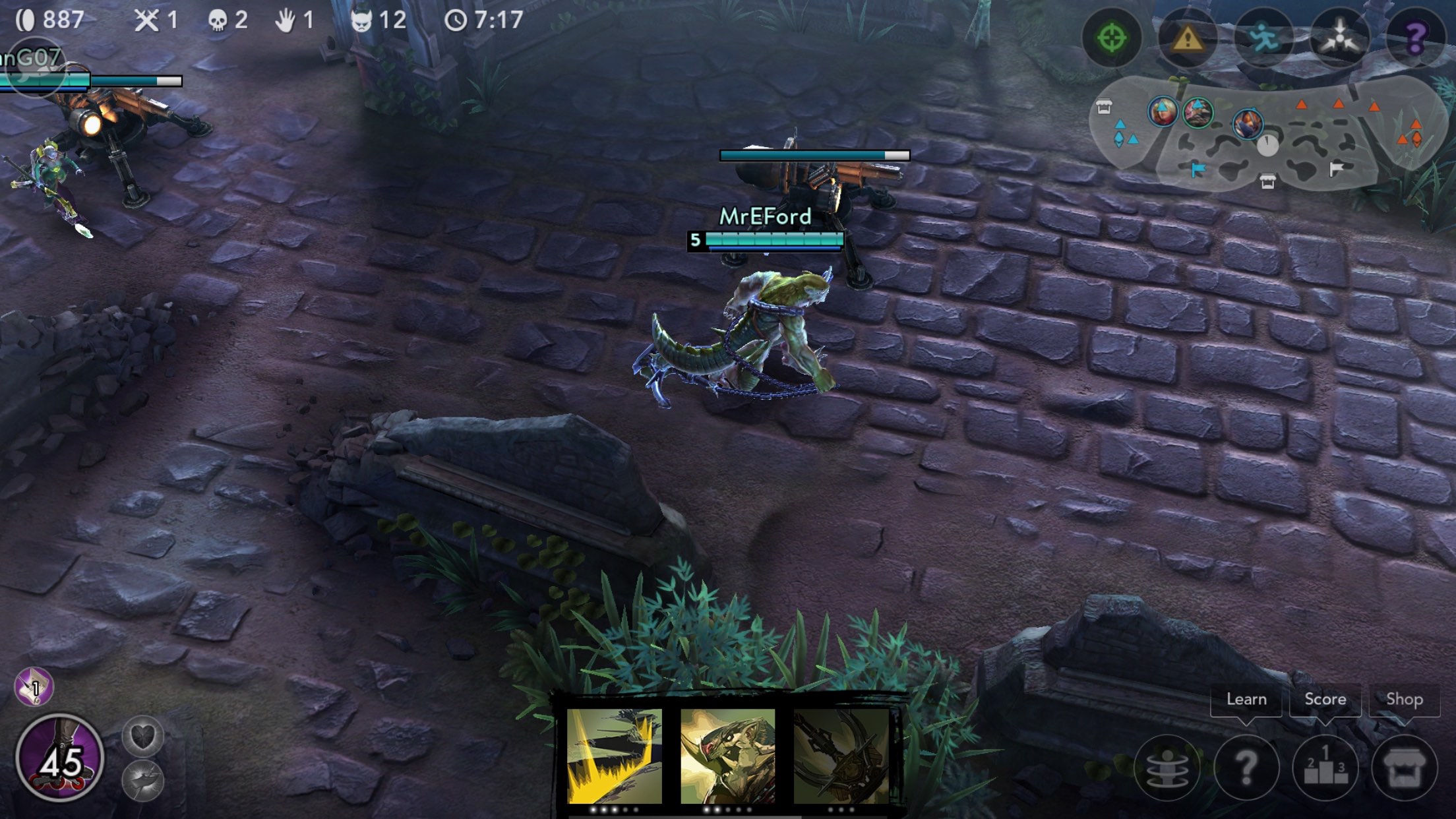 Let’s start with his Heroic Perk, which is appropriately titled Unstoppable. Unstoppable has two awesome traits associated with it. First, Phinn cannot be stopped or stunned which means that anytime an opposing hero using a stun move on him, it simply slows him instead. This is a pretty cray perk and basically makes Phinn impervious to ambushes that rely on stuns. It also means that he’ll always be able to use his abilities, which we’ll get to in a second. The second part of Unstoppable is a pretty impressive buff that has Phinn getting an additional 15% buff from items and effects that improve armor, shield and max health. That means when you build for defense with Phinn, you’re really going to get some defense.
As a giant tank, it’s no surprise that each of Phinn’s three abilities are all based on crowd control. For example, Phinn’s first ability, Quibble, has Phinn slamming his anchor down onto the ground near him, which heavily slows enemies for nearly a second. Sure, it causes some damage that can be amplified with Crystal but the low cooldown and slowdown elements are the real appeal with Quibble. Even cooler, if you upgrade this ability to overdrive, the slow turns into a second long stun. Combined with the 5 second cooldown and maybe a Clockwork, and Phinn can seriously cause some havoc with incessant stuns of the opposition.
Phinn’s second ability, Polite Company is an AOE that has a few effects. First, the AOE does damage to all enemies which is amplified by crystal. Second, the AOE actually launches affected heroes towards Phinn, which almost causes a mini stun as they are launched towards him. Finally, Polite Company also grants a barrier to nearby allies with bonus armor and shield for two seconds. Overdrive launches enemies even further towards Phinn. This is an excellent companion to Quibble as you can use it to pull enemies close enough to launch Quibble and slow them. 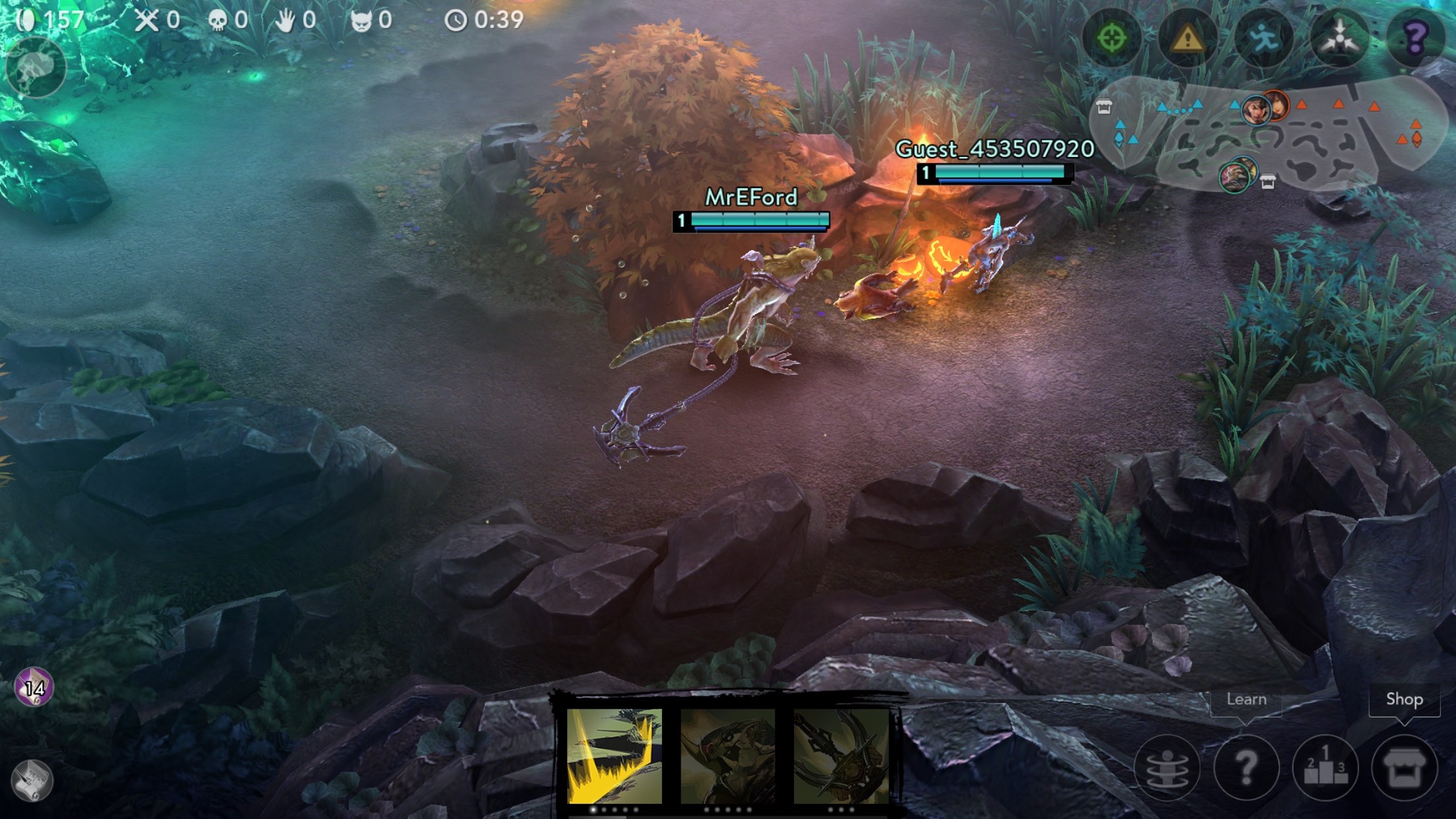 Phinn’s ultimate, Forced Accord, is the ultimate in crowd control. Tap in a direction and Phinn throws his anchor. After it reaches its destination, Phinn yanks it back, damaging all enemies in its path and pulling them back to him. In other words, it’s the ultimate tool to pull escaping enemies back for more fun. It can also be used as an initiate ability if you’re able to pull a squishy hero away from their companions or away from the comfort of a tower. Even cooler, if Phinn misses, the cool down is partially refunded. Of course it can also backfire if you happen to pull more heroes than you wanted, such as a melee carry or whatnot. Overall, Forced Accord is a pretty high risk-high reward ability that truly has the potential to turn the tide.
So now that you’ve gotten a handle on Phinn’s abilities, how should you approach using him in-game? Well, as you might imagine, Phinn is best used in a roaming/support function in the jungle. I’d recommend forgoing the recommended Sprint Boots and going for the Ironguard Contract first. While this means that Phinn is going to be incredibly slow at the onset, you absolutely need the Contract for coinage. Also, effective leading of the jungle enemies to the next rotation target will keep Phinn moving enough so that you aren’t slowing down your jungle buddy too much.
In any case, I’d take boots as your second item as soon as you can to make the jungle rotations easier. Afterwards, your remaining items should focus on support, defense, and life. Because of the excellent default cooldown of most of Phinn’s abilities, picking up an Hourglass to Contraption (after going banner from contract) is a pretty good idea as it satisfies a few things that greatly benefit his role (namely, vision and cooldown reduction). Oakheart/Lifespring/Fountain is another obvious choice as Phinn’s perk will make him a tank with Fountain while its active use is good for his support role. From a defense standpoint, I’d suggest countering and going either armor or shield depending on the situation. Finally, once you’ve built all that out, considering getting a Sfiversteel to augment his slows and top it off with Tornado Trigger, Breaking Point or Aftershock. Obviously there’s plenty of room for modification depending on how much you defense and health you want for Phinn, but I think the above is a pretty decent build.

As for how to use Phinn in general? Take advantage of his defense and health to lead into battle. Stay hidden with your team in a bush, take advantage of your slows during an ambush, pull the opponents back in with Polite Company and Forced Accord, and simply try to be the center of attention. If you can just keep in the back of your mind the fact that Phinn needs to take damage, you’ll have a clear idea of how to use him. Also, make sure to practice good support techniques for your other allies.
If Phinn seems like a hero that’s up your alley, well he’s now available for purchase with good ol’ Glory. Also if rotations work as usual, you’ll probably see him make a free debut in a month or so. Finally, feel free to join our open guild if you’re looking for folks to play with.