Penguins are one of nature’s most fascinating creatures. In the years that have passed we’ve seen movies such as Happy Feet and Surf’s Up pay homage to nature’s most wonderful aquatic flightless birds, but upon general observation, penguins are known primarily for their gracefulness, elegance and their unusual upright waddling gait. They’re also incredibly badass, and if there’s any game that will demonstrate this, GameResort’s Adventure Beaks (Free) is most certainly the iOS game to capture your hearts.
In this charming little platform runner, you lead a highly elite squad of penguins as they slide, dive, swim, and belly-flop their way across icy glaciers and large bodies of water on their hunt for artifacts, treasure and various goofy outfits. Along the way, you’ll have to time your jumps and dives perfectly in order to avoid obstacles, kick seal butt, and reach the other end in one piece. Should one penguin fail on his mission, the next penguin immediately takes over, and so long as you’ve hit a checkpoint (more on that in a second), you’ll start straight away from that position. 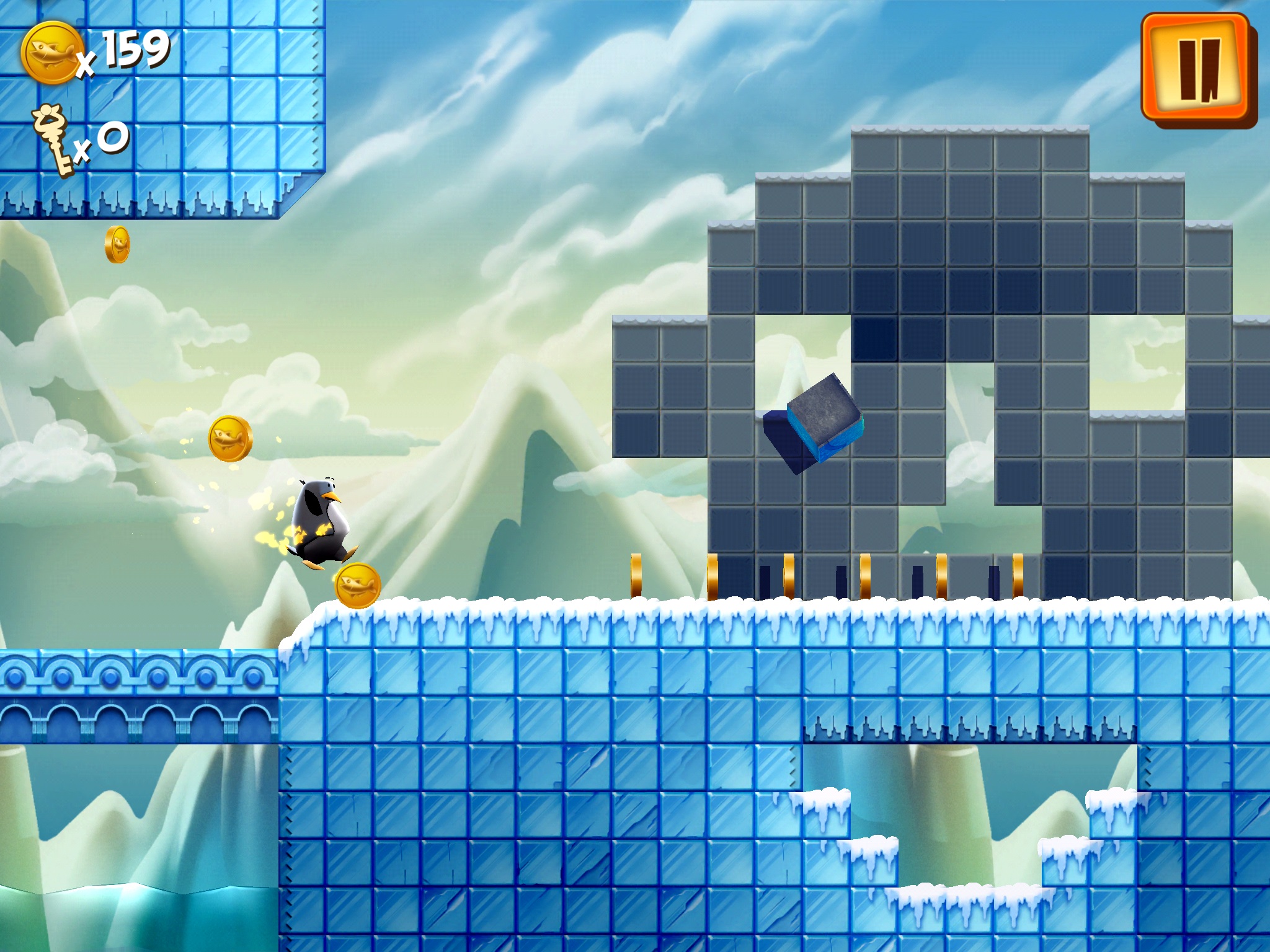 You have two control schemes to pick from. One involves swiping up and down to jump, dive and slide, and the other involves tapping on the left side of the screen for sliding and diving and the right side for jumping. I found the swiping system fairly spot on (if not a little hard initially to get to grips with) but both work just as well as each other.
Adventure Beaks is one game that rewards you with its high replay value. On each run-through, aside from the countless treasures and valuables you’ll scoop up along the way, you’ll also come across numerous pieces of an artifact scattered across each level. Essential for unlocking further stages, there are eight pieces in total to collect, and it’s impossible to do so on just one play-through. Thankfully, any treasure chests you’ll snag along the way can also reward you with not only an explosion of coins, but keys that unlock new paths within each level.
Each stage is divided into numerous checkpoints, from which all of the artifacts and valuables you’ve collected by that point will be “banked”, so even if you subsequently mess up, you’ll still get to keep everything you’ve snagged on the run up to that point. However, if you knock out all five of your penguins, it’s game over, so it’s still best to keep your wits about you. Most of the levels have branching paths, so on a second run-through it can really open your eyes to items you’ve previously missed, not to mention the various moving floors and inconspicuous levers that can lead to a previously hidden treasure box or special item.

The level design is in fact some of the best I’ve seen in a platform runner so far, and one of the reasons I found myself returning to play this game over anything else. Adventure Beaks is a highly generous game, and alongside the huge world map to unlock and explore, there’s plenty to keep you invested in playing. Aside from the main missions, there are also additional side challenges that give you the opportunity to unlock a new outfit upon stage completion, thus making your penguins look so much cooler.
Although Adventure Beaks is a free-to-play game, there’s not really any essential in-app purchases you will need to make unless you really want to kit out your penguin squad. There are no pay-walls, nor do you have to part with any of your cash should you want to complete the game fully. It’s a truly satisfying experience, and one that you’ll keep wanting to return to, if not only because the penguins are undeniably adorable.