By Vlada Gelman / April 13 2022, 1:55 PM PDT
Having spent 15 seasons together on Supernatural, the men who used to go by Dean and Sam Winchester almost didn’t even need full sentences when Jensen Ackles stepped behind the camera of Jared Padalecki’s current CW series Walker.
“It was very nice to be back with someone who I’ve got such an incredible shorthand with, which we’ll always have,” Ackles tells TVLine. “You don’t lose something like that. Spending 15 years building that up, that’s never going to go away. So that was fun. And being able to direct him in such a quick way… I think some of the other cast were kind of like, ‘Wait, what was that note? Did you just reference a movie and you’re now changing your tone?’ So those kind of things were a lot of fun for he and I to play with.”

In addition to marking an off-screen reunion between the former castmates, the episode (airing this Thursday at 8/7c) also features a Kansas performance of “Carry On Wayward Son” (aka the unofficial Supernatural theme song), as well as plenty of other references to the pair’s long-running drama.
Below, Ackles discusses the nods to the Winchesters that he snuck into the hour, the prank he pulled on Padalecki and whether he’ll make an on-screen appearance on Walker. 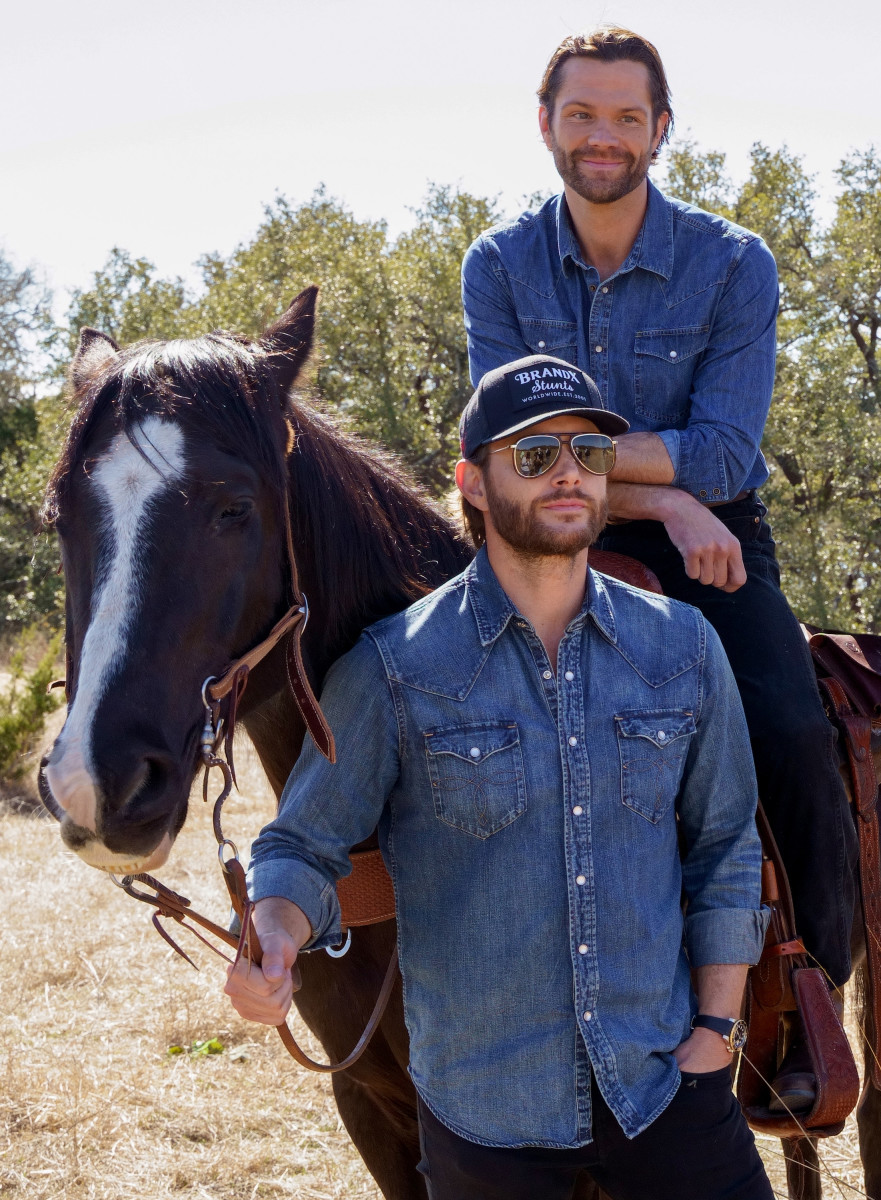 TVLINE | What was it like working with Jared again, but for the first time on something where you aren’t in the world of Supernatural and he’s not playing Sam Winchester?
I feel like if I ever get on screen with Jared, we will instantly fall into those shoes. So it was a good thing that I wasn’t actually sharing the screen with him, allowing him his space to be this new character, which was a lot of fun to watch. Because not only do I know him as Sam, but I also know Jared very, very well, and I’ve probably had to stare at his face more than most people on this planet, and I’ve seen all the idiosyncrasies, the facial expressions and the reactions and everything that he does. So none of that was very new for me. It was just kind of a variation on a theme…
And we had some fun on set, probably more than I think the rest of the cast was used to having. And this is one thing that Jared and I kind of laughed about. I was like, “Man, it’s amazing that all the jokes that we repeated for 15 years are now landing on fresh ears. We have a whole new audience! This is amazing!” [Laughs]

TVLINE | When the show first premiered, it took me a minute to wrap my head around the fact that Jared was now playing a dad to two high schoolers. So I was curious if there was anything that surprised you or something new that you learned about Jared, seeing him as this new character, seeing him in this new capacity in a new show?
I mean, that’s the thing, I spent a lot of time with Sam Winchester, but I spent more time with Jared Padalecki. I know him as a father, I know him as a brother and as a son and a dear friend. So I’ve seen him play these roles in real life. So to see him just kind of translate that to on-screen stuff, it was no stretch for me. It was just another facet of the person that he is, and he’s really good at it. So seeing him bring that to the on-screen character just seemed very natural in my eyes. 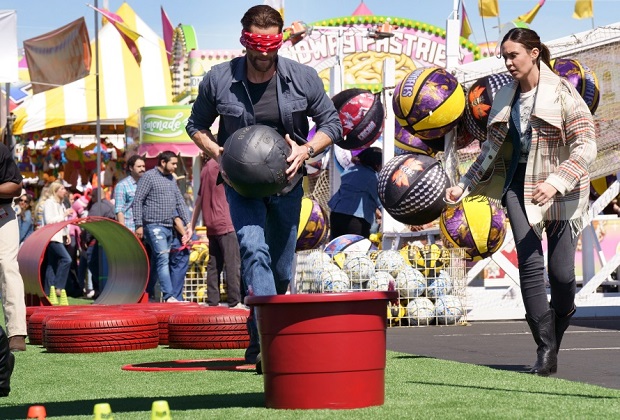 TVLINE | I feel like there must be a story about filming the blindfolded obstacle course scene with Jared.
I mean, look, I could have really like brought out the big guns for that, but I do know the guy and I do love the guy, and I was like, “I don’t know that this is the kind of torture I want to put him through.” [Laughs] Honestly, I’d do a whole episode about just him trying to make it through an obstacle course. I’d watch that. But it was a hot day, Jared sweats like crazy, and it would have made for a miserable shoot. So I actually tried to make it as doable as possible and took it easy on him. I got him in other ways. I had a life-size bear come to life and attack him in one of the scenes.

TVLINE | How did the Kansas performance come to be a part of the episode? Was that a make-good from them not being able to be in the Supernatural series finale? 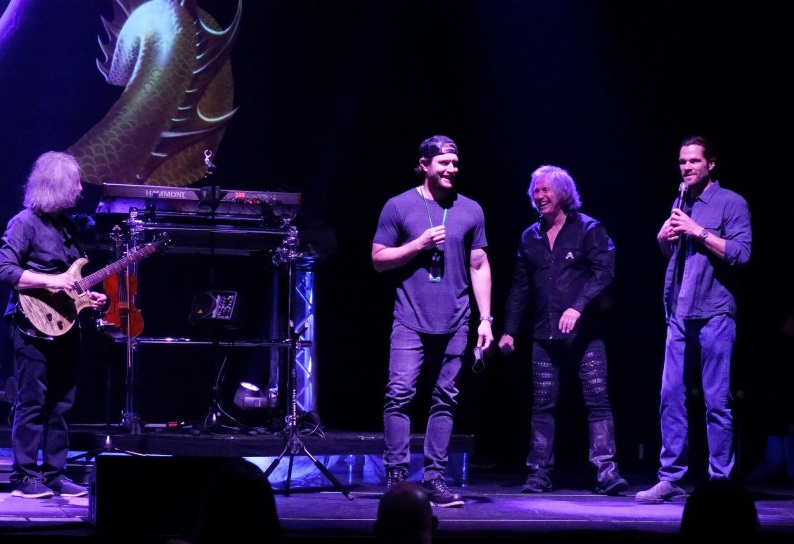 Yeah, the planets kind of aligned as they kind of fell apart at the end of Supernatural. But they kind of aligned for it to happen, and everybody kind of looked at each other like, “Wait, can we actually do this? Can we make this happen?” They asked if it was something that I’d be cool with, and I was like, “Absolutely! Let’s 100 percent do that! What we tried to do two years ago, let’s absolutely try and do that now.” Kansas was totally game and just totally great and awesome about it. The crew was super excited to be all of a sudden shooting a rock concert. I think I’ve got some behind the scenes footage of me literally dancing and singing at the top of my lungs behind the director’s monitors during one of the takes, so I’ll have to post that whenever the episode comes out.
TVLINE | Were there any other nods to the show that you included in the episode that maybe I missed or that were more subtle?
Some very subtle ones. I don’t know if you noticed, but I kind of opened up on a plate of bacon being slapped down. Very Dean Winchester. There’s also a very familiar green cooler that gets brought into a scene, and that was the actual cooler that Sam and Dean sat on and drank out of and sat in the back of the Impala for 15 years. I had to massage the dialogue a little bit. I think Mitch [Pileggi] looked at it and he was like, “What kind of heathens would…?” I don’t think that was in the script.

There was a few others. I have to go back and remind myself, but there was definitely some verbiage, too, that was thrown in. [For one scene], we needed a shadowy figure of some sort, and I said, “Hey, this is the perfect opportunity to slide myself into the episode.” [Laughs]
TVLINE | I know you’ve been very busy with The Boys and The Winchesters, but has there been any discussion about doing an on-screen role on Walker? And if so, what type of character would you like to play?
There has been some talk about it, but the possibility has been earmarked, we’ll say, until things kind of slow down with my schedule — if they do. I’m kind of over committed as it is right now. So we kind of just said, “Well, down the road, we’ll keep an eye out.” And if I was to ever do it, I don’t know if it makes sense to do something completely opposite of what he and I did for 15 years together, or if it makes sense to lean into that a little bit, have some familiarity there. I don’t know. We’ll see if we get to cross that path. I wouldn’t be surprised, also, if somebody comes knocking and says, “Hey, they want to do a Supernatural short-order reboot or movie or something,” and then that’s the next time you see Jared and I together.
TVLINE | I don’t think anyone will be complaining about that.
[Laughs] We’ll see.
Kaia Gerber Weighs In On “Nepo Baby” Debate: “I Won’t Deny The…
Scott Rolen’s Solo Nod a Harbinger of Hall of Fame Votes to Come
Oscars 2023: Best International Feature Film Predictions
‘9-1-1: Lone Star’: Gina Torres on Tommy’s Faith-Filled Premiere…
The Best Jewelry Boxes for Men to Keep Their Accessories Safe…
TVLine is a part of Penske Media Corporation. © 2023 TVLine Media, LLC. All Rights Reserved.
PMC Entertainment
Powered by WordPress VIP