Hello everyone, and welcome to Musgravian Musings, a little space of my own where I can do some non-review reflections on recent game releases. In general, the featured games are ones that have caught my interest in some way or another, and will tend to be games that I didn’t (and won’t) review. This time around, I’m looking at the latest Pokemon game, Pokemon: Magikarp Jump (Free). It’s more entertaining than you might think, and a lot of that comes down to its contrasting tones. Let’s take a closer look at this bizarre game.
At first, it seems quite innocent. I mean, it’s a Pokemon game, right? It might be fun for adults, but let’s not fool ourselves here. These games are usually aimed squarely at kids, and if they happen to hit a wider demographic spread, it’s a happy side effect. With its simple clicker-style design, Magikarp Jump seems to have little appeal for those outside of the hardcore Pokemon crowd. But things aren’t always what they seem to be, a lesson we all should have learned by now from Magikarp. Is it not the lowest and least powerful of the original bunch? And yet, properly cultivated, it turns into a terrifying Gyarados, a sea serpent with tremendous power. Simply by the choice of the headlining Pokemon in this game, we should already be suspicious of its true nature. 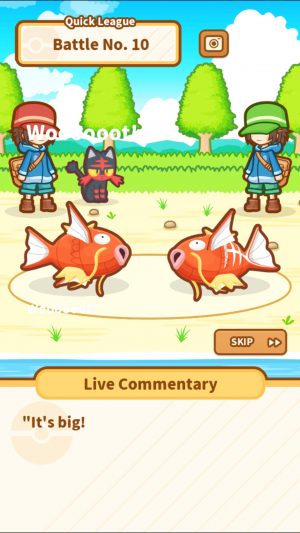 In the beginning, though, it just flops about on the ground. Maybe gets some things around it a little wet. I don’t know. You fish up a Magikarp, tap on some food, maybe do a training exercise or two, and join in a jumping tournament. Winning those tournaments is apparently the goal of the game, and it’s really just a simple matter of having a Magikarp of a sufficiently high level. Eat the food. Do the training. Wait for some timers to expire. Do more training. Tap the Pikachu. Is this even a game? I don’t know. I’m just going to keep on tapping. I’m starting to get attached to this little Magikarp of mine. I even got to name him. Carter is a good and brave little fish-pup.
Little do I realize that Carter’s journey will soon be over, and it can only end in a few different ways. Maybe he’ll reach his maximum level, at which point he can take one last run at the tournament before retiring to the depths of the fish pond. If that happens, I’ll still see him in the background sometimes, but I will never hold him in my arms and see him do a spectacular jump ever again. But fish in the pond is lucky, to paraphrase our old pal Sebastian. There are plenty of worse fates that can befall a Magikarp in this game, and the longer you play, the more of them you’ll run into.
The first time it happens is shocking. I know I’ve said this before, but this is a Pokemon game. Pokemon. It’s about friendship and trapping your friends in tiny balls before unleashing them to battle their kin at risk of life and limb, all for your glory. Maybe you steal a bike and make some new friends that way? But you don’t put them in a ball, because that would be weird. Anyway, my point is that Pokemon is a family brand and while it often flirts with light horror, it is largely an experience with soft, sanded-off edges. Pokemon don’t die, they just faint. Heck, even the humans in Pokemon don’t really die for very long. Pikachu cries on them and boom – hearty and hale once more. 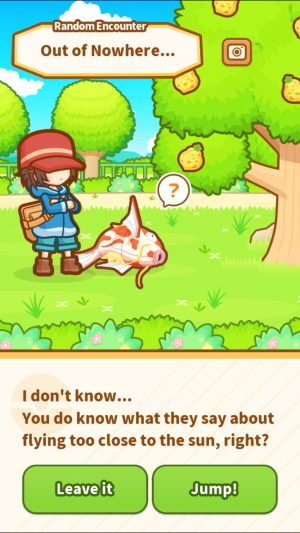 There’s something about Magikarp, though. This Pokemon is the butt of many jokes, which is really saying something in a franchise with a sentient ice cream cone and Psyduck. Although they are said to be mostly scales and bone, Magikarp are frequently suggested as food, both for other Pokemon and humans. The Magikarp in Magikarp Jump tend to be fatter than usual, too. But it’s probably not on your mind as you feed your good little fella a variety of berries or take it for walks. I mean, Pikachu showed up to cheer this little fish on. This is obviously one special Magikarp.
Sometimes when you come back from training, a random event occurs. It’s here that you get something you don’t get anywhere else in the game: a choice. The deeper you go into the game, the more types of events can potentially happen. Early on, one of the more common ones sees your duo come across a tree full of berries. Those sure are some good looking berries. You’d probably get a ton of JP if you eat one, maybe even enough to gain a level or two. All you have to do is have your Magikarp jump up and nab one. This seems fine, so you say yes. You’re then given an additional warning, and now you’re a little more nervous. But again, what can happen? It’s a tree.
You know what lives in trees, friends? Birds. Birds live in trees. Including one of the Kanto region’s biggest jerks, Pidgeotto. You might remember him and his seven-hundred thousand cousins from Pokemon Go. If you’re unlucky and your lovely Magikarp catches his vile eye, Pidgeotto will swoop down and take your Magikarp away. And that’s it. Your precious baby that you shared so many memories with is gone. Dead. Sushi. Why did you try for the berry? You couldn’t just be happy with the meager returns that come safely? You played fast and loose, my friend, and your loyal Magikarp paid the price. The ultimate price. It’s dead. 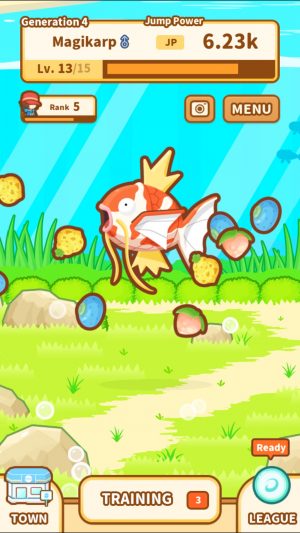 This becomes a regular theme in Magikarp Jump. Events can have big rewards, but participating in them runs the risk of killing or losing your Magikarp in a million different ways. This is what it means to be at the bottom of the food chain in the cruel world of nature. Magikarp just wants to jump the very best, like no one ever has. But now he’s dead because you mistook a Voltorb for a Pokeball. That doesn’t seem to stop your trainer, though. There’s no loyalty here. You just return to the pond and fish up another one. Give it a name again. Why do you even do that? You know the poor thing has been born into a meat grinder of a world. But you name it anyway. This time, this one. This is the one that will succeed. This Magikarp will defy expectations and make it to retirement as a champ.
Except it won’t. Progression is linear. Evolution is required. Each and every Magikarp you fish up is going to hit a ceiling soon enough, at which point you will discard them, fish up another one, and name it again. Why do you keep bringing these fish into such terrible lives? Does it really mean that much to win the Hufflepuff League or whatever? Apparently so. You add some new food to the tank, work in a couple of new training routines, and hope. Hope that it will survive long enough to fail and pass its ambitions on to the next generation. I’m not saying these aren’t valuable life lessons. They just seem a little heavy for a Pokemon clicker for kids, that’s all.
This may in fact be one of the most deceptively nihilistic games I’ve ever played. How many generations of Magikarp do you think you’ll go through by the end of the game? How many names? Worse yet, at what point will you stop naming them, simply accepting that they will inevitably amount to little in the grand scheme of things? Hundreds and hundreds of Magikarp, each and every one of them trusting you in good faith. Each and every one headed for disaster. And for what? So you can pin six little buttons on your jacket? Kids don’t even use buttons anymore. They’ll probably go in a desk drawer and get forgotten until the trainer’s mother throws them out one day. It’s meaningless. It’s nothing. 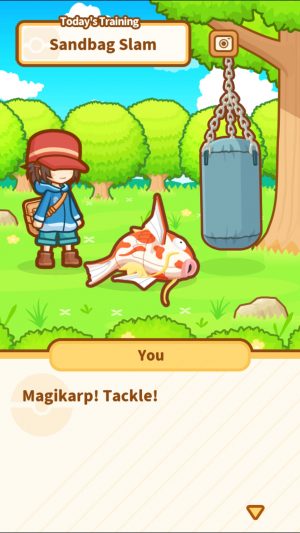 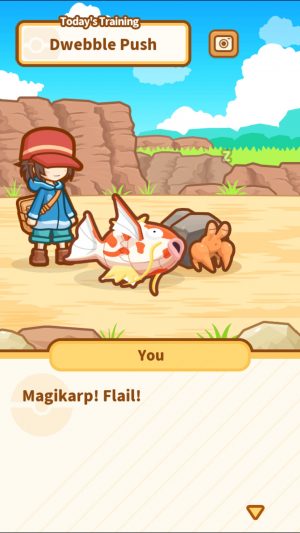 Wait, is this meta-commentary on the clicker genre? Pokemon wouldn’t do that, would it? But maybe it would. I’m all torn up about this, friends. Is the point of Magikarp Jump that we realize the futility of Magikarp’s existence, and through it recognize our own precious mortality? I don’t know! But maybe it is! Let us remember the sacred words of the original English theme song for Pokemon. You teach me, and I teach you. Pokemon. That exchange isn’t always even, and today that’s certainly the case. I thought I was teaching you, Magikarp, but instead you taught me.
Anyway, back to clicking on the berries. Ha, ha! He jumps so high.
This article is dedicated to the memory of Carter the Magikarp. He was a good fish who was too curious for his own good. RIP.

How To Unlock All General Store Items In Pokemon Legends: Arceus – TheGamer