Tucked just off the side of US 19, a small West Virginia climbing town is growing. Fayetteville has long been the center of New River Gorge climbing, and, more recently, became the location of Jonathan Siegrist’s Full Metal Brisket 5.15a. 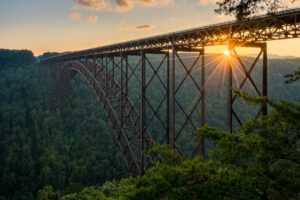 Although many will move and stay in the New River valley for the hard climbing, relatively few climbers travel to the Gorge when it’s in season. Many go to the Red instead, waiting in line for word class sandstone. Although the Red is a beautiful crag, the bullet-hard, iron laced rock of Fayetteville, West Virginia offers a completely different, infinitely exciting style of rock climbing. What’s more, it’s more than just sport climbing.
Outside climbing, the New River gorge is one of the oldest rivers on the continent. It hosts the largest single arch bridge in its hemisphere, at nearly a mile long and nearly 900 feet high. Those who drive along the bridge find a view made even more special by autumn, when the Sweet Gum changes colour.
The park encompasses over 70,000 acres of natural history, and has even become home to some legendary first ascents by likes of Chris Sharma, Lynn Hill, Alex Megos, and others.
Historically, you went to the New to go sport climbing. Although the gear routes are incredible and the bouldering has developed far beyond what many might have expected for the area, the sport climbing remains the crown jewel of the New River Gorge.
Where some areas feature one style of sport climbing, the New carries every angle imaginable between the 100 foot slabs of Endless and Kaymoor, to those same areas’ face and gently over hanging pitches. Endless Wall is so named as the developed portion is an unbroken three-mile cliff line that stretches down the length of the New River proper.

But not everything at the New is low angle. For steep climbing, Summersville Lake and its Coliseum provide numerous routes ranging from 5.12a through to 5.15a, with everything in between. The shelf-like rock features differ from the waking sandstone of the Red, instead boasting beautiful plate-like jugs and some of the most fun climbing in the area.
Summersville sits about 20 minutes outside Fayetteville on a dam-made lake that drains in the winter. When it drains, it exposes bouldering in the lake bed. When its full, as in the summer, it is a centre for Deep Water soloing.
Back in the New River Gorge proper, Kaymoor features some classic overhanging routes, in an area called the Hole. Outside Kaymoor, the Cirque boasts some of the more aggressive higher angle climbs. At the Meadow, one of the United States most aesthetic routes sits along the Greatest Show Area.
The Greatest Show On Earth is a Lynn Hill 5.13a the includes one of the most intimidating looking finger cracks in the southeast. If this seems a little steep, several classic on the lower end exist at some of NRG’s most aesthetic crags.
Voyeur Variation, for example is a spectacular mixed route that climbs into a dihedral. Jaws is another beautiful route that Solveig Korherr flashed two years ago before she really broke out into sport climbing.
The bullet hard sandstone of the New River Gorge also presented in a recent documentary with Hazel Findlay and Jessa Goebel. The pair walk about the New River Gorge trying numerous classic routes and placing bomber protection.
Although Greatest show may have some slippy gear, the sticky hard sandstone that describes much of the New River Gorge climbing makes is a great place to learn to place gear, or to push yourself on protectable sport climbs.

Although the New has been most closely associated with sport climbing, the rapidly developing bouldering scene has begun to draw attention from eastern climbers. More and more Canadians and New Englanders have begun trying the bouldering developed by many of the silent locals.
Although finding footage for some of these climbs can, at first, feel challenging, Aaron Schneider has kept a consistent annual video log of boulders he has developed, along with those developed by visitors and other locals.
In April, Ben Wheeler, Adam Shahar, and Austin Hoyt took a trip down to the New to test themselves on the Nuttal sandstone. Halfway through their trip, Hoyt had this to said, “The NRG is crazy. Ben Wheeler and I are a little more than halfway done with our quick trip, but I know we both want to stay for so much longer.”
Before the pandemic, American Boulderer Jimmy Webb travelled to the New for the Boulder Bounty where he and Daniel Woods established several beautiful, if not, at times, terrifying first ascents.

There are several campgrounds to choose from including the American Alpine Club Campground, Ray’s, and the Chestnut Creek Campground.
The Alpine Club is probably the most developed campground with electricity, showers, camping pallets on which you can pitch your tents, and site-specific picnic tables.
In the warmer months, Summersville Lake is a great place to go deep water soloing and swimming. There is a Jump Rock in the Coliseum that is a wonderful place to cool down after your climb. Separately, Orange Oswald, another subsect of the Summersville climbing area, features a flat open entrance to the water.


Get the digital edition of Gripped for your chosen platform:
Press Display
Apple News+
Zinio